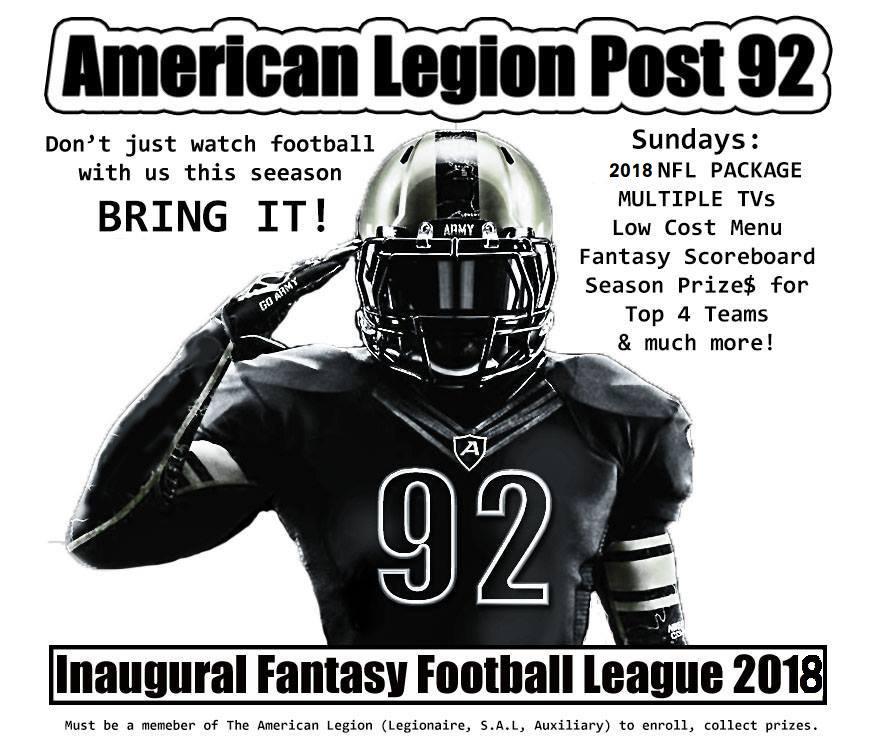 Join us every Sunday and do battle with friends! Post 92 has the NFL Ticket & 5 Televisions* to follow your players live! Early, Afternoon, & Evening Games**! Low cost food during the season. Free Wifi..bring your laptops/devices. Real Time League scoreboard

What is Fantasy Football?

Fantasy Football is a competition in which participants (Owners) create “fantasy teams” which draft and acquire real NFL players. Each week, team owners have individual games against each other. You score points based on the actual performance of your players in their real NFL games. The winners of each game are the teams with the most points at the conclusion of the real NFL week (usually at the end of Monday Night Football).
The fun includes Draft Sunday where all owners will get together and draft their team’s players. Come prepared, you will be on the clock to choose! Weekly bidding wars on cut and un-drafted players will follow!

Can’t commit to every week? Draft your team, then take your chances and put your lineup on autopilot! Some of the best Fantasy Owners are those that have a good draft and leave things be!

*Miami Dolphins games will always have first priority on the main TV from beginning to end. If more games airing then televisions available, bartender will decide based on majority interest.

This site uses Akismet to reduce spam. Learn how your comment data is processed.